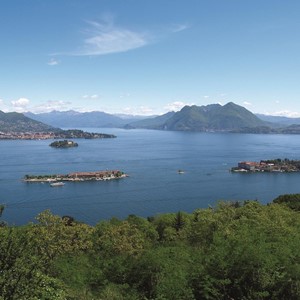 In 1670 Count Vitaliano Borromeo decided to turn a rock awash in the middle of the lake into a “place of delights”. It took four centuries to complete this magnificent work that includes Palazzo Borromeo and its scenic gardens. The tour of the house is fascinating: the Throne and Queens rooms, the Napoleon’s Room, the Gallery of General Berthier displaying a collection of 130 paintings. On a lower floor, six grottoes covered with pebbles, tufa rock, stucco and marble were designed to afford cool relief from summer heat. World famous, its baroque garden, with the Teatro Massimo at the centre, consists of ten terraces in the shape of a truncated pyramid. Visitors marvel at the sight of the monumental unicorn, the obelisks, the statues, the two towers and other architectural elements, as well as the mighty trees, like the camphor and citrus trees, and the collections of roses, rhododendrons and camellias.

Isola Madre is the largest of the Borromean Islands and the most important of Lake Maggiore because of its exotic flair. Described by Gustave Flaubert as “the most voluptuous place I’ve ever seen in the world”, the island has changed its appearance over the centuries: initially an orchard, then an olive grove, then a lush citrus grove, it is now a botanical English park, established in the early 1800s. Thanks to a favourable climate, it hosts rare exotic plants and flowers from the world’s most diverse latitudes. Sheltered n the centre of this botanical treasure chest is the famous cypress of Kashmir, which was once uprooted by a whirlwind and now brought to new life. Next to it, the sixteenth-century palace has preserved the prestigious furnishings of the House of Borromeo. Highlights include the Reception Hall, the Hall of Seasons, the Venetian Lounge, the Hall of Battles. A collection of vintage marionettes and puppet theatres are on display: they were used in performances intended for the entertainment of family members and friends.

Fishermen’s Island owes its name to what was once the main income for its inhabitants, but nowadays there are only a few fishermen living amongst the island’s small population. The rustic appeal of the island lies in the narrow cobbled streets, pretty houses and the ancient church of San Vittore. The island is brimming with excellent restaurants offering lake fish on their menus and there are bustling little shops and stalls where you can browse for souvenirs.