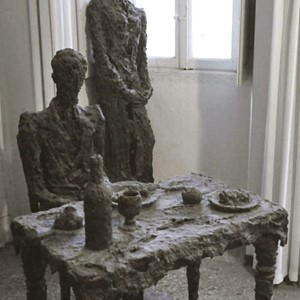 Born on Isola Superiore dei Pescatori, Andrea Ruffoni, developed artistically through frequent study travels in Italy and abroad (France, Germany, Switzerland and Austria), with a lengthy sojourn in Vienna, where he acquainted himself with all the major contemporary art movements.

After initial works in oil and coloured glass he produced pictures consisting of plexiglass layers and sculptures in black lacquered gesso and salvaged wood from the lake. From 1976, following his final return to the island, he developed an original technique for burning and melting plastic materials on a metallic mesh, using hardening media and finishing them with sand, iron oxide, ash, tar, etc., for incorporation into the achromatic magma of entire human figures or fragments of everyday objects and other traces of life.

On the island he restored his house, his studio and workshop, and furnished them with his own artwork. He also settled a small garden overlooking the lake forming an ideal place for meditation. In 2007 the Museo del Paesaggio in Verbania Pallanza exhibited his works accompanied by a monograph. In 2014 Andrea Ruffoni’s house, atelier and garden have been opened to the public.

Critical Profile Andrea Ruffoni was a kind man although at times he could be quite cutting, above all with those that, through ignorance or obsessiveness with money, did not respect the environment and other people’s values. The whole of humanity, of which his Isola Pescatori is but a fragment, is severely altering nature and all traces of past ways of living with the misguided exploitation of environmental resources by producing waste and polluting both visually and with sound. This is one of the most serious problems facing us and one that the wisdom and sensitivity of Andrea Ruffoni, during the years marked by the nuclear disaster at Chernobyl, felt deeply and which he incorporated into his works.

Following initial use of painting and plastics, characterized by the cheerfulness of colour and light, come the residual traces of everyday life, worn clothes, plastic containers, waste from man-made fibres, scrap metal from mechanical objects, which appear dramatically in his works and which through them undergo a transformation with oxy-hydrogen flame and iron or charcoal. It returns them as an “archaeological” testimony to the collapse and genetic mutation of mankind and the environment in which we are immersed and of which everyone, in their own way, is morally and materially responsible.

Andrea Ruffoni’s art, as with any true art form, is not so much a superficial entertainment, or simple amusement, but a vehicle that conveys the truth in order to help us. After all, in the ever more refined treatment of the surfaces of pictures and sculptures, he has created masterpieces of great beauty and in the minor works of building restoration he carried out a total respect for the environment. So it's clear that, at the base of the denunciation and artistic exorcism of this deadly nightmare of everything surrounding us and living inside of each one of us, emerges above all a deep reverence towards mankind and a longing for a lost, or soon to be lost, earthly paradise.

Andrea Ruffoni’s house, atelier and garden where are exposed his works, are open:

Months of July, August and September: Wednesday to Sunday

For information and reservations: