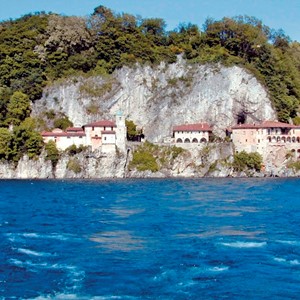 The Sanctuary is a monastery situated on the eastern shores of Lake Maggiore. In the 12th century a merchant called Alberto Besozzi was caught in a storm whilst out on the lake. He promised that if his life was spared he would give all his worldly goods to the poor and retire to live a hermit’s life. His life was spared and so he fulfilled his vow and chose a cave near the current site of the sanctuary as his refuge. When plague broke out towards the end of the 12th century he persuaded the local population to build a church dedicated to Saint Catherine, where he was later buried. If arriving by boat please note there are many steps to reach the Sanctuary.