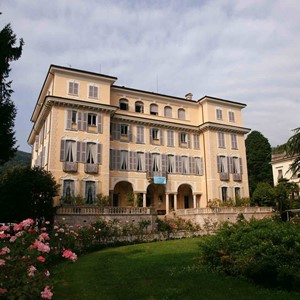 The Villa Ducale is the oldest villa in Stresa. It was built by the Bolongaro family around 1770 and is located on the lakefront. From 1850 to 1855 it became the residence of the abbot and philosopher Antonio Rosmini who was considered the greatest 19th century Italian thinker. The most well known personalities of the Renaissance were guests at the villa. The philosophical conversations and discussions between Manzoni and Rosmini are particularly well known. In 1857, Elizabeth of Saxony, Duchess of Genoa decided to live in the Villa (hence the name Villa Ducale). Her daughter Margherita married Umberto I of Savoia and became Queen of Italy. Since 1966 the villa has been the headquarters of the International Centre for Rosminian Studies with the aim of promoting the thoughts and work of Rosmini and culture in general. The Study Centre is open (from Monday to Friday 09.00-12.00 / 15.00-18.00) and you can visit the following: the Antonio Rosmini museum, Antonio Rosmini’s room and the gardens. After Villa Ducale our itinerary continues to the monument dedicated to the friendship between Manzoni and Rosmini. It is located in Via Manzoni, half way to the Colle Rosmini, and was erected in 1932. The crucifix and the bas-relief are work of the sculptor Pietro Canonica. Following the road further you will reach the SS. Crocifisso Church at the Colle Rosmini. From here you can enjoy wonderful panoramic views. Here you can pause in front of the monument dedicated to Rosmini which is work of the sculptor Vincenzo Vela from Ticino. You can also descend into the crypt where the mortal remains of the philosopher are buried and where the tomb of the Rosminian religious poet, Clemente Rebora, is located.